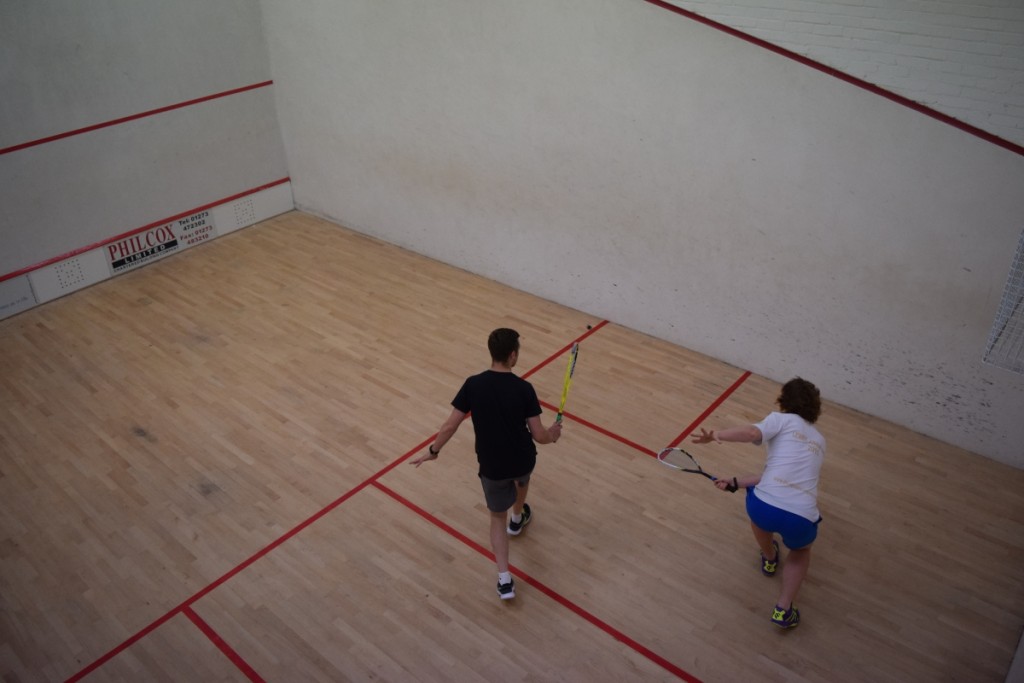 “Is that the sport you play by yourself?”

“Is that basically tennis but indoors?”

“Is that the game where you hit the ball against the wall?”

What game is squash?

Played in an indoor court, the aim of squash is to make a small rubber ball bounce twice on the floor before the opponent is able to return it. So, yes squash is played by two people. Though you can play doubles, as a three, or even with dozens of people on court at the same time in three-quarter games.

Squash is a brutal sport. You have to be extremely quick to get to the ball but you also have to have great endurance and recovery to keep getting that ball back time and time again, especially when it can travel as fast as 270kmh!

Whilst being a physical adonis, you also have to be as shrewd as a chess player, weighing up your shot options, the positioning of your opponent and more all in a fraction of a second.

To me, squash is that rally between Mohamed El Shorbagy and Ramy Ashour in the final of the 2012 World Championship in Qatar. If you haven’t watched it, do so here.

The History of Squash

There’s a myth that squash was started in a prison. I really like to think this is true, as it is far more scandalous and exciting than the other version of events that says squash was invented at a private school. It also feels somewhat poetic to think it was invented in a prison. Surrounded by walls, it seems only natural a sport such as squash would develop there. I really want to believe it’s true, even if all evidence now seems to point in the other direction.

The World Champion who didn’t play a match

The first British Open was held in 1930, although if you have a little glance through the history books you will find Charles Read ‘won’ the 1929 British Open. There was a slightly different format for this first event though, with Read appointed champion by a committee and thus becoming the only player to win without even playing. A talent we all would dearly love to have.

Read’s premiership didn’t last any longer than the first year though, as he was unceremoniously dumped off the throne by the another Englishman Don Butcher in straight games in 1930. Initially, the final was a two-legged affair, meaning Butcher beat Read twice to claim the title. This two-legged final format lasted until 1947.

This wasn’t the open tournament we would expect to see today. In order for players to challenge the incumbent champion they were required to pass stringent pre-requirements such as providing prize money of £100 and proving they were good players, not just opportunists wanting to write their name into squash folklore.

Keeping up with the Khan’s

From Butcher’s triumph, the Egyptains dominated either side of the World War, before Pakistani players clinched thirteen consecutive British Opens in the new knockout format. This was the first Great Khan Dynasty, with all thirteen titles won by four players from one family; the Khans. If any family deserved a reality TV show, it was the Khans. If it had been commissioned, Keeping up with Khan’s would have followed Hashim through six consecutive titles before cousin Roshan pinched one back, prior to Hashim claiming one last victory in 1958, before making way for his younger brother Azam and his four consecutive championships. Finally, Hashim’s nephew Mo won the 1963 title against future champion A.A. AbouTaleb, uncle of our very own Hany Abou-Taleb. The Pakistani family were so dominant that they claimed 22 of the 26 final slots in the British Open during their reign between 1951-1963.

Perhaps the biggest turning point in squash’s history came in the career of the legendary Jonah Barrington, the first ever professional squash player. Barrington revolutionised the amateur sport with his incredible dedication to fitness and training, raising the bar for everyone. He certainly didn’t have the most attractive style of play; the younger Barrington would’ve certainly shaken his head at half of the blasphemous articles and pages on here about attacking and winning rallies.

Barrington went onto win six British Open Titles, which at the time was regarded as being the equivalent of a World Title in squash, which didn’t exist in its own right until 1979. Barrington himself duelled frequently with the more skillful Geoff Hunt and a Pakistani contingent but overcame his opponents to claim his six titles in the space of seven years, falling only once to Hunt who he bested in two other finals. Hunt would later go on to be the first ever World Squash Champion when he won the first even World Open in 1979 defeating Mohibullah Khan. Hunt then claimed the next three, all of which were against another Pakistani, Qamar Zaman.

Keeping up with the Khan’s The Sequel: The Clash of Khans

After a series of near misses, Pakistan once more dominated squash. And once again the cast was largely made up of Khans. Jahangir, son of Roshan, and the unrelated Jansher warred on court throughout the 1980’s, with Jansher spreading his record eight world titles into the 1990’s. The Australian contingent of Geoff Hunt, Chris Dittmar, Ross Norman, Rodney Martin and Dean Williams provided squash competition but none could compete with the two Pakistani’s, with the great Hunt reaching the twilight of his career as Jansher and Jahangir emerged.

Jansher became the first player to hold both the World Junior Open and the World Open titles at the same time when he won the 1987 editions of both events. With his outstanding puppeteering style, which saw him move his opponent around at will, he was able to end Jahangir’s unbelievable World Record unbeaten run of 555 matches over five years, a record which still stands to this day. Jahangir was also the youngest ever World Open Champion at 17. Jahangir’s penchant for a winning streak also drove him to win TEN consecutive British Open’s between 1982-1991.

Jansher and Jahangir’s rivalry was so hotly contested that in the 1988 World Open Final, the first rally lasted in excess of six minutes. Six minutes for one rally! You can probably guess that the rally also ended in a let ball, meaning the rally had to be replayed.

The modern era and the Egyptian Renaissance

As Jansher’s knees failed, he gave way to the next contingent of World Champions, spearheaded by Peter Nicol and the maverick and hugely popular Canadian Jonathan Power. The two players were hindered by the farcical failure to host the World Open in 2000 or 2001, before David Palmer of Australia claimed the title in 2002.

This was to be the beginning of a second wave of Egyptian talent though, with Amr Shabana winning the first of his four World Titles in 2003 and the first of seven Egyptian titles in the next 13 years. Ramy Ashour added the other three titles to Egypt’s haul and Karim Darwish and the man who will certainly one day become World Champion, Mohamed El Shorbagy, were both runners-up. Omar Mosaad of Egypt came second in the 2015 edition of the tournament which saw Gregory Gaultier finally win the title in his fifth appearance in the final.

The modern era also saw the first ever English World Champion (excluding Peter Nicol who was Scottish despite switching allegiances), as Nick Matthew won three titles in four years between 2010-2013, including one against his long-time rival and fellow Yorkshireman James Willstrop.