Rationalising irrational thoughts…. It affects everyone.

I’d wager everyone who has ever played sport has experienced a limiting belief at some stage at least once. Limiting beliefs can affect people of all ages, ability and experiences and even those who might seem to be confident.

They can afflict people at any time but they tend to come mainly just before, during or in between matches. They tend to be expressions of doubt in an area of the game but this is not always the case. They sometimes are the result of a perceived failure, which means they can often affect the minds of very strong players more.

Examples of limiting beliefs or actions:

The Perfectionist: ‘I have to hit every shot exactly where I want it to go. If one shot I hit doesn’t do exactly what I intended, I’m not playing well enough.’

The Perfectionist Limiting Belief often effects strong players whose perfectionism has driven them very far as they constantly look for ways to improve their game and tend to practice a lot to satisfy their own inner voice.

The line at the top of this section about hitting every shot where I wanted it to go was the sort of inner monologue that afflicted me constantly throughout my years as a junior player and held me back in a number of ways. Being a perfectionist in training and indeed in wider life can be a great thing but only if you can avoid letting it taking over during performance.

I went into court believing I should hit every shot well. Every shot that I hit should feel good, look good and land precisely where I intended it. If one shot refused to bow to the omnipotent power of my inner mind, the game was up and I was a failure. I wasn’t even a particularly strong junior. I flirted on the edges of the County Squad and beat many of those at the lower end of the order and played my fair share of tournaments but I was certainly never a real prospect. Yet I believed I should be producing masterpieces every time I stepped onto the court.

This is not an uncommon trait. There are many out there who set themselves incredibly high standards and begin to become agitated the moment it starts to deviate even slightly away from those standards.

You should always believe in yourself and believe you can achieve the impossible BUT if the best player in the world and possibly the best player of all time makes mistakes, how can you possibly expect to play the perfect shot every time? When these thoughts come into your head you have to rationalise them, as they are irrational thoughts. How can you possibly be perfect every time? It’s irrational to think you can. Let us rationalise this irrational perfectionist feeling many of us have had once and for all.

In the World Open Final of 2012, Ramy Ashour faced his Egyptian compatriot Mohamed El Shorbagy in a titanic final featuring one of the greatest and most watched rallies of all time.

Ashour is already widely regarded as one the best to have ever played the game and so far has won Three World Opens despite the fact he hasn’t reached the age bracket that would be traditionally seen as the peak for an athlete. Yet in the first game he played awfully and was thumped by Shorbagy 11-2.

How easy it would’ve been for Ashour to spiral out of control and believe that it wasn’t his day or that he just wan’t playing well or in a good spell of form. If he had any limiting beliefs, he wouldn’t have come back to win.

It’s simple – simple to say that is – he let it go. He let his performance in the first game go, he didn’t dwell on it. He spent time on court after the game refocusing and hitting a few balls and suddenly he started to grow into the match more and more.

Has your defeat in a rally or game been as bad as Ashour’s was with the World Title at stake? Then why can’t we take a leaf out of his book? If he could let it go in the most important match in the World Squash calendar (perhaps aside from the British Open), why can’t we let a bad shot or a bad game in a league match or friendly against a team mate go?

In spite of it all, you are still human. You aren’t a PlayStation character and so how can you expect to hit every shot perfectly? If Ramy Ashour can’t do it every time, can you seriously expect to do it every time?

Sure, you should always aim high and aim to play every shot to the best of your ability but don’t beat yourself up when you don’t reach dizzy heights with every ball you touch.

You can create a new rational belief for your mind from this which might be ‘If Ramy Ashour can’t do it every time, can I seriously expect to do it every time?’ or ‘I’m only human.’

How do you feel now? Next time you are feeling particularly picky with your game on court, think about all that we’ve discussed here. You are human and nobody gets it right every time.

Rationalise those irrational thoughts by questioning them and creating a new rational belief to replace them, such as ‘I’m only human’ or ‘I will work hard to make the next shot better’.

Here’s another irrational thought and limiting belief. It often comes about after a player hits a couple bad shots, in this example drops, although it could be serving, boasting or any other shot you care to mention.

If you think this, the chances are you will end up being right. Once you decide you aren’t dropping well, you will start to become apprehensive about playing drops. You might continue to force yourself to play them regularly or you might even start avoiding them and only hitting them nervously when you know a drop is overwhelmingly the right choice of shot. It goes without saying that forcing shots or playing them nervously are not effective ways to set about improving a shot’s success rate.

There is more often than not also a bit of selective thinking going on in these cases. We often gloss over victories where we think we played very well, forgetting that in these matches we also hit some bad drop shots or a few down but because we won the game and felt good in general, we tend to forget or not focus on these shots as much. It’s a bit like how we focus on a train being late. “That train’s always late! It’s the second time this month!” Of course, we neglect to think about the fact that the train was on time the other twenty-eight days of that month. We tend to build a picture around what we want to see and this can be the case with sport. We play very well one day and therefore overlook the bad parts of that match but then another time, perhaps when we are not in such a good mood, we play some bad shots, perhaps fewer even than in the so called good performance and suddenly we allow ourselves to believe this has been an exceptionally bad game.

As if it wasn’t enough that our mind is being selective, our brain neurons can also go against us if we draw negative attention to a shot or action. What usually happens is that you take conscious control and start thinking too much about how to play the shot, which is the exact opposite of what you want to do. Taking conscious control of an action slows it down and reduces the effectiveness of the automatic process that takes place in your neurons and nervous system when you execute a shot.

Perhaps you did hit two bad drops in a row. Perhaps you hit five in succession that didn’t feel right. So what? How many hundreds or thousands of drop shots have you hit in your life? How many hundreds or thousands of good drop shots have you hit? Have you forgotten all of those? You are human so not every drop shot will be perfect or even satisfactory. You are always due a bad shot or two, such is our nature. So why do you use one or two examples to make such a sweeping statement?

Remind yourself of all the good drops you’ve played and shrug off these missed ones as simple anomalies, which is what they usually are (unless you need major technical work – you’ll know if you do as you’ll persistently make a lot of errors). Once more, not every shot can be perfect so let these bad examples go and focus on the next shot, as the only thing you can change is the next shot.

On this occasion, your new rational thought might be; ‘I’ve hit plenty of effective drops, these were just one or two lapses, which everyone has. I’ll do my best to make my next shot better.’

Or, if you can remember a time you played great drops, even better: ‘I remember that game vs. Geoff in the leagues where I hit so many great drops. Everything I touched seemed to come off. Clearly, I can hit good drops, these were just a couple of exceptions as not everyone can be perfect. The next few will be better than these.’

I promise you that if you allow irrational thoughts such as these to persist, they will become self-fulfilling prophecies. As Henry Ford once said; ‘Whether you think you can or you think you can’t, you’re right.’

Other limiting beliefs and irrational thoughts include:

‘I’m not playing well at the moment/today/this evening’

Whenever you have a negative thought like this enter your mind, take a second to rationalise and actually consider how preposterous the thought sounds. Then form a new belief or sentence in your head focused on the future.

Once you have done this once or twice, you will remember the feeling of rationalising the thought and you can actually activate or call upon this feeling in a matter of seconds between rallies to calm yourself and rid your mind of any limiting beliefs without thinking about it.

Take 2 minutes of your life now to write down some of the limiting beliefs you’ve had before. Proceed to pick them apart and once you’ve revealed them for what they are – irrational thoughts – and then complete the rationalization by writing down a new belief using the system below.

The System for dealing with irrational, limiting beliefs: 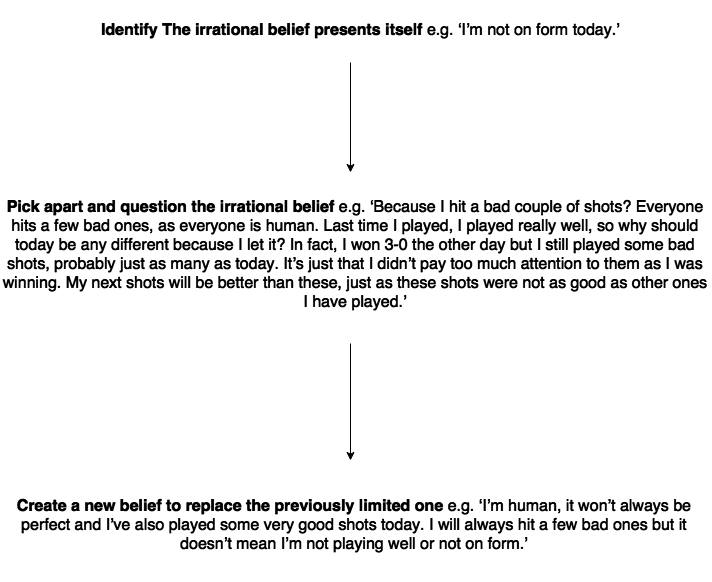 Much of what I have written is a mixture of the thoughts of many people. Some of it is my own thought but much of it I have learned from the works of others. All of these various sources of knowledge have now become indistinguishable from one another and so it is no longer possible to cite each and every point and its origin.

I do not claim that any of the above is my own work but the coming together of the works of many which I have simply bound together and intertwined with my own thoughts and experience.

The following titles are just some of the sources which have influenced and provided knowledge for different parts of this section:

Syed, Matthew. Bounce: The Myth of Talent and the Power of Practice. New York: Harper, 2010. Print.