“Hi I’m Robert Downer. I’m 22 and I am a Hampshire based Professional Squash Player competing on the Professional Squash Association (PSA) World Tour, as well as a Full-Time student at the University of Winchester where I study Sports Studies with Sports Psychology. With my blog, I’ll be giving you an insight into my life and my quest to reach the World’s top 20 and beyond and more importantly win PSA Shot of the month at least once, as well as the wacky, wild and at times downright bizarre world of professional squash.”.

I first took up squash when I was 4 years of age when my dad introduced me to the sport, having taking it up the year before. He was set on keeping me away from football and he really encouraged my interest in squash. His external motivation wasn’t required for a lengthy period though as I became forever hungry to be on that squash court, a hunger that has carried me right the way through my junior career and beyond. I honestly believe I’ll play on the tour until my body has had enough, as my mind will never say; ‘that’s enough’.

I currently move between my home town of Portsmouth, my university base of Winchester and Lee On The Solent where I train with a group of Pro’s including Oliver Pett and Steve Wykes under the guidance of my coach Tim Vail. The travelling does make it tough to fit everything in.

Combining professional squash and education is something I never imagined myself doing and a challenge which is testing my mental limits! The University of Winchester have been fantastic though and given me a full scholarship in partnership with Winchester Racquets and Fitness Club in return for me promoting squash and the university. Not a bad deal all round with the prices of Student Loans in England now but it can be difficult combining my studies with my training and a tournament schedule which sees me compete in over 10 International PSA events and several UK Based ones a year.

I exploded a few times in my first semester of university, as I was just not finding time to train. I really didn’t understand how to manage my time efficiently. I have that disease known as  procrastination and I struggle to motivate myself to get on with work unless I can see the deadline looming, which is certainly something I am working on, as I’ve had to put down the racquet for a week before due to the studies building up too much. I spend lots of my life studying on planes, trains, buses and sometimes even the beaches of Dubai!

As a junior I won six Hampshire Junior County Championships across all five age categories and was Senior Champion at 16. I also reached number 1 in England at U17 level, before reaching number 1 in Europe at under 19 level. Perhaps my greatest achievement though was reaching the final of the U19 British Junior National Championships, where I toppled number 2 seed and current World No. 67 Charles Sharpes in the semi-final. I may have lost out in a close 3-0 to top seed Ben Coleman in the final but that the semi-final win over Charles meant the world to me. I was an emotional wreck the night before playing Ben due to the disbelief that I had actually beaten Charles. It had been six years since the previous win!

During that season I won the Senior County Championships, I also made it into the top 8 in U17 European rankings which gave me free PSA World Tour membership for the next season, which lead me to entering my first PSA tournament, the Meersquash Heroes Open in The Netherlands. I snuck in a week before the tournament was to due be played and so hurriedly booked my flights and arranged to crash on a friend of mine’s sofa in the heart of Amsterdam. Not only was I unseeded, I also had to play a round of qualification as I was the lowest ranked player on the entire PSA Rankings, which I guess made me officially the worst player in the world. However, I shocked everyone including myself by taking out 4th seed Phil Nightingale and 6th seed Bastiaan Meulenbelt, before edging out Northamptonshire’s Mark Fuller in the Semi-Final. That match was one of the most gruelling matches of my career so far, as I came through 12-10 in the fifth after I had saved a match ball at 10-9 down in that fifth game with an incredible 4 minute rally that even the referee noted. It meant the world to me and also made me eligible for the prize of facing Top seeded Dutchman Piedro Schweertman in the final – on the same day! I lost 3-1 but that tournament still remains my first and only PSA final appearance to date, though I’ve made three Semi-Finals.

Just recently I gained entry into the Dubai Squash Cup ($25K) in November 2014 which will be the largest event I have not had to qualify for so far in my career, which is a nice sign of my progress on the PSA Tour.

Rob will continue to blog for The Squash Company on a regular basis.


Watching the ball is incredibly important in squash but not always as simple as it sounds. Do you ever feel like you just don’t see the ball as early on one side of the court? Is your Volley stronger on one side than the other? It may be to do with your eyes!

The idea of the ‘Radar Eye’ has to be one of my favourite coaching discoveries of 2013/2014 and was shared with me by England Squash High Performance Coach Paul Carter.

As many of you may be aware, the vast majority of people have a preference for one eye or the other; one eye is dominant. In most cases, it is the right eye which is the stronger one, although a significant number of people have a dominant left eye and a small number of people have equally proficient eyes. The impact on squash of the dominant eye can be hugely significant as it is responsible for assessing spatial and positional information to a high degree, which of course you need when hitting a small ball at high speed under time constraint.

I used to relish the Backhand Volley and was renowned for my Backhand Drop Volley but never seemed to be able to replicate my success on the Forehand no matter how hard I tried. I lost count of the number of people who said I needed to Volley more on my Forehand. It wasn’t that I was taking it easy on my Forehand or felt less comfortable. If anything, it felt like I just wasn’t in a position to Volley on the Forehand or never quite prepared. 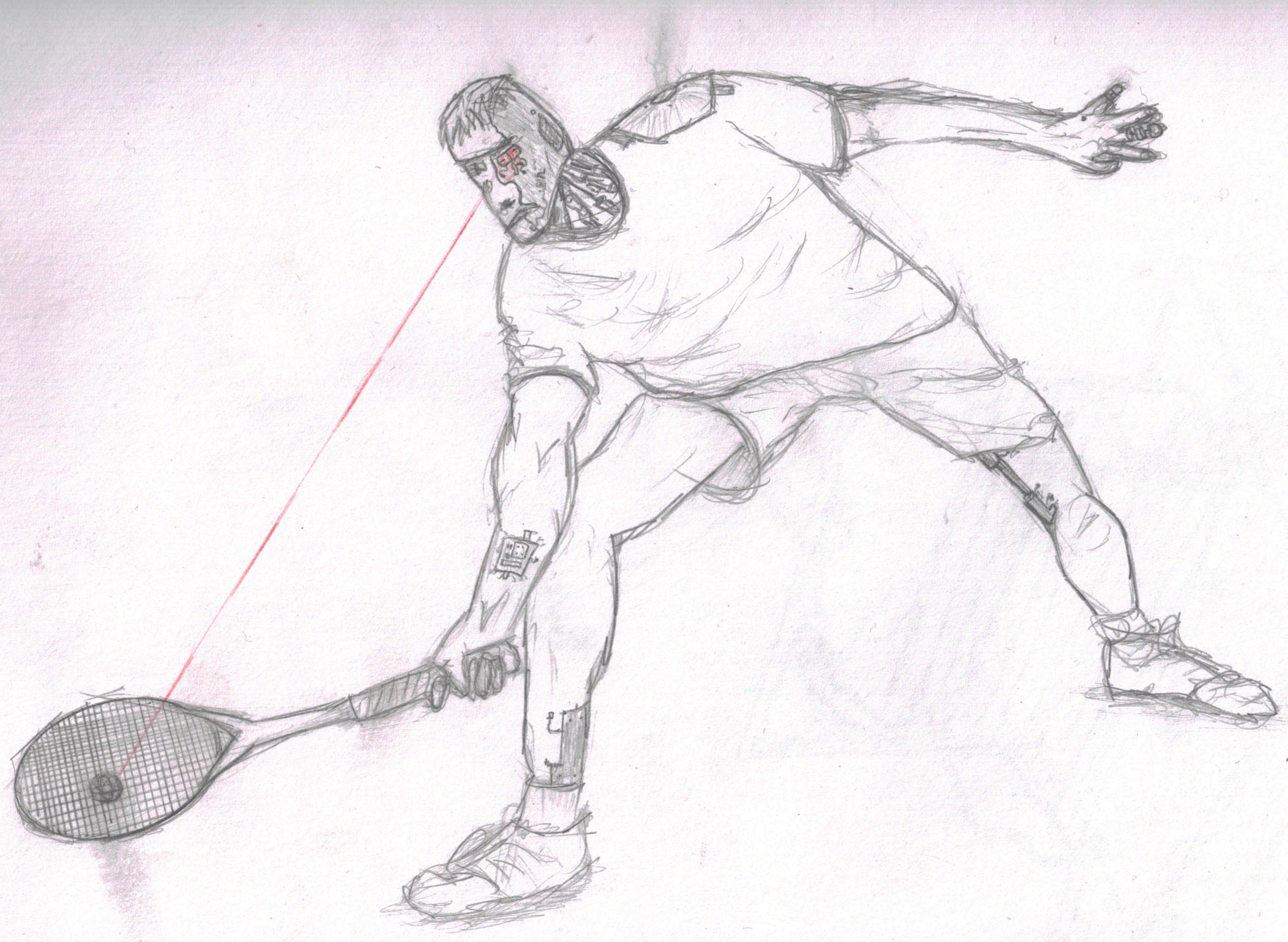 I used to relish the Backhand Volley and was renowned for my Backhand Drop Volley but never seemed to be able to replicate my success on the Forehand no matter how hard I tried.”

For me, my right eye is dominant by quite some distance and it so happens that on the Backhand my right eye is the one facing forwards, with the left eye in a weaker position and forming my peripheral view, which is all well and good given my right eye is the stronger on. On the Forehand, the opposite was true. My weaker left eye was the one charged with spotting the ball on the forehand and sourcing volley opportunities, while my right eye was wasted in the back. This was enough to ensure I was missing large numbers of opportunities to Volley on the Forehand, which meant I was losing the T-Position and also missing opportunities to increase the pressure on my opponent.

Having a dominant eye is completely normal and not something that can really be fixed and doesn’t need to be in any case! The solution is simple. TURN YOUR HEAD. I have even encouraged some players to take a more open stance, with your body pointed towards the corner, similar to if you were playing a traditional Cross-Court shot, to great effect. This change of positioning allows the dominant eye to become involved in spotting the ball and can be used on both the Forehand or Backhand side depending on which eye is dominant.

This is something I now do myself and it has helped me spot the ball as early as I do on the Backhand and I now have the option to Volley a lot more frequently on my Forehand than before.

If you are not sure you can test which of your eyes is the dominant one using the Dolman Method. Look at a faraway object through a small hole in a piece of paper or similar object using only your left eye. Then repeat the process with the right eye. One of the eyes will usually produce a clearer image and feel easier to focus with, indicating dominance. Of course if both eyes feel fine, you are likely to have co-dominance in your eyes and missing those Volley opportunities may be down to something else!