A small tip for improving your forehand volley

When hitting a forehand volley above the head, it is a very common but lazy technique for players to ‘swat’ at the ball with a frying pan style. By this, I mean starting with the racket face and inside of your wrist and palm directly facing the front wall and swinging downwards by bringing your hand straight towards the floor, not unlike a tennis smash. This style can be effective from time to time in hitting the ball hard and bringing it low but it can also result in errors and is rarely as accurate or consistent as an overhead volley hit with proper technique.

Opening the racket face and chopping

The way to achieve greater accuracy with overhead forehand volleys is to really open the racket face. For these forehand volleys, you can open your racket face by rotating the forearm clockwise (right handed players) or anti-clockwise (left handed players) so that the edge of your racket goes towards the ball first. If you can hit the ball with an open racket face, even when the ball is up high you will have much greater control over the shot. To bring the ball low, you will need to swing the racket from high to low, almost in a chopping motion. This ‘chopping’ motion as part of a high to low swing with an open racket face gives you far greater fine control over the ball than using a flat, frying pan swat swing.

This chopping motion can be particularly useful when dealing with a high serve or when you are presented with an opportunity to attack a ball in the middle of the court, so have a go and see if you can improve the quality and consistency of your overhead volleys.


Trying something different to gain the advantage

A tactic that has been successfully deployed against me in the past – and which I still haven’t managed to deal with – is to hit all long shots (i.e. drives) excessively hard, as well as low where possible, although the low part doesn’t seem to be a requirement!

A player did this to me after I steamrollered them in the first game taking the ball so early they couldn’t cope with it and they gradually turned the game around. When they were hitting traditional straight drives or playing lob shots, I was controlling the game on the volley. Even when they went short earlier with drops, boasts or kills, I was able to stay in front of them and control the game. The excessively hard drives worked perfectly as the ball was simply too fast and a bit too wild for me to volley. It came off the back wall more than normal drives would have done but this was a worthwhile trade off for stripping me of my volley attacks. It meant he could actually get in front of me, which was also a positive for him as he had a very good attacking volley himself. 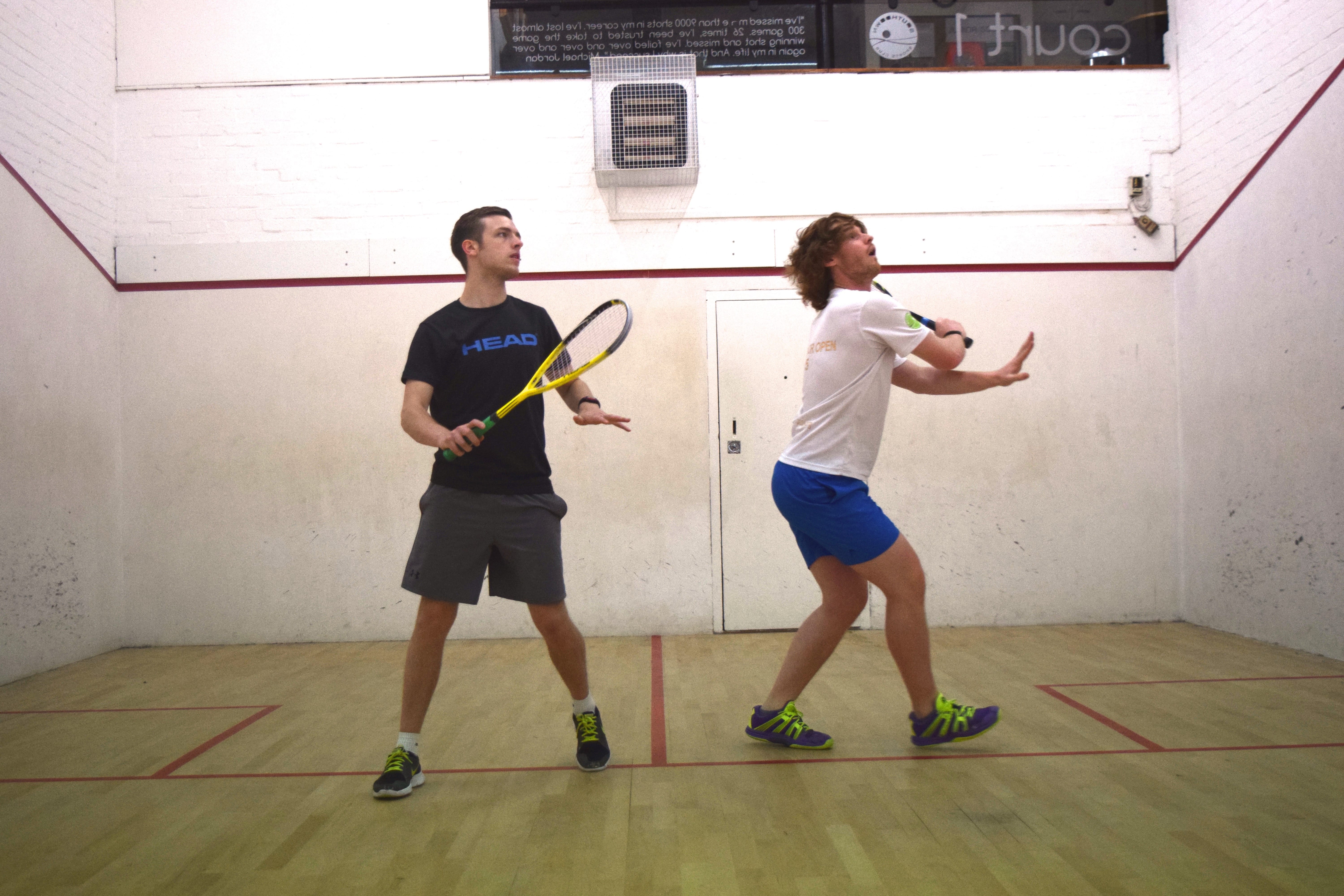 Not overhitting the ball

While he was hitting the ball very hard, he was still making sure he didn’t drastically overhit it. The ball was still bouncing before the back wall and was also being hit with a downward angle, which meant he was able to reduce the amount the ball would rebound off the back wall. I had more freedom than I would typically get at the back but I wasn’t able to control the pace of the game as I did on the T-Position. I also typically had to go long from this position in spite of having extra time as the ball came off the back wall, as he was now in front of me and had the pace to get most short shots back unless I made it roll out of the nick!

If you’re playing someone who is exceptional at volleying, this might be a tactic worth trying out. It also just goes to show that sometimes you’ve got to break out of your normal style and perhaps even conventional style to get the upper hand against some types of players.

The biggest instance of snatching defeat from the jaws of victory in squash is when players dominate a rally and do all of the work to get in a great position, or are gifted a great opportunity, and then become casual and make a mess of what should’ve been the winning shot. 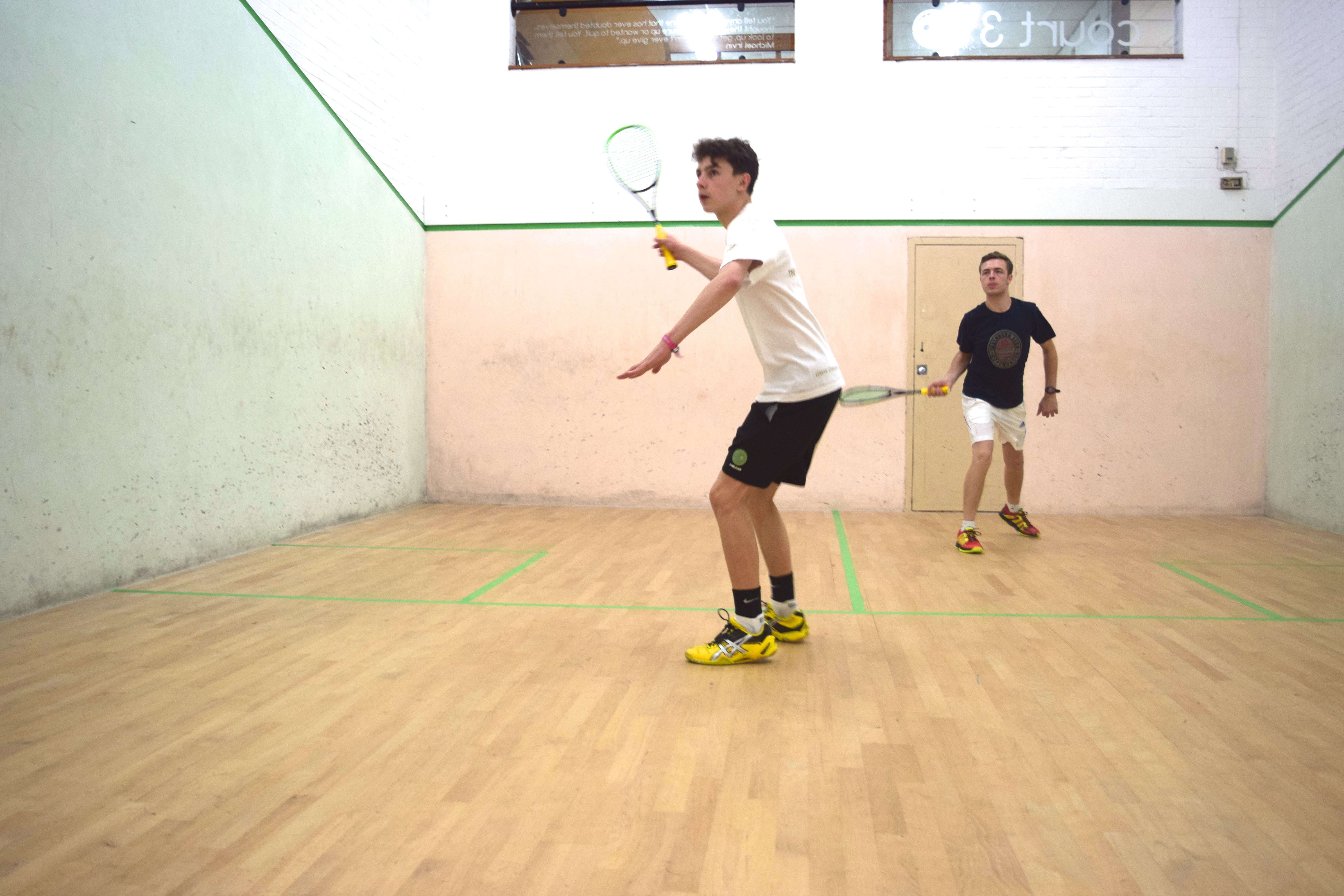 Loose, awkward balls down the middle

It happens a fair amount when a player is on the T-Position and forces a wild, loose shot towards the middle. Instead of giving this shot the treatment it deserves, lots of players will flail at the ball and throw away the opportunity to attack a loose ball. While these shots are often awkward to deal with, we have to be prepared for them as they often present a fantastic opportunity to attack. If you are struggling with shots that are coming at your body or close to you, try to practice improvising. You can do this simply by working on your racket head speed, which can be as simple as hitting volleys to yourself as fast as you can from very close to the front wall  (see video below). Exercises like this help you develop dexterity with your racket, which is important when the ball is in an awkward position.

Alternatively, you can have a partner play loose cross-courts at you which you aim to drop volley tight to the side wall. Figure of 8’s (see video below) are also a great way of developing speed of racket, feet and thought when done in challenging circumstances.

Always play as if the ball will be returned

Often though, defeat is snatched when the ball isn’t even coming awkwardly at the hitter. Players frequently act as if they have won the rally after their opponent hits a weak shot. This is a terrible attitude to have as you lose the positioning and quality on your shot, and then the movement out of the shot, all of which can cost you dearly. If your opponent has hit a weak shot, it is time to up your game, not relax and put your feet up. Receiving a weak shot should be like the moment a shark smells blood – it should be the moment you go gung-ho. There’s nothing worse than playing a drop shot too high because of casualness, or worse, managing to still play an accurate drop shot but not moving back to the T-Position properly and so being caught out when your opponent scrapes an awful shot back. Always play as if your opponent will return every shot you play, that way you can stay focused.

When you are playing, notice if you are converting and capitalising on the chances you create and the chances you are given. Or does your profligacy hold you back and possibly even cost you a match in which you dominated the majority of the rallies?


Claiming the T-Position at the start of the rally.

A foot is a huge distance in squash. A second is a long time. If you stand a foot higher up the court or hit the ball a second earlier, even a half-second, it has a huge knock-on effect and changes the pace of the game. If you hit the ball level with the T-Position, as opposed to being nearer the back of the service box, that might be the difference between catching your opponent unaware and unprepared and catching them perfectly calm and positioned on the T-Position. Both of these scenarios would lead to drastically different rallies and outcomes for you and your opponent.

Doing everything earlier or higher up the court

The big opportunity that lots of people miss on court is when their opponent plays a long shot from the front of the court. Rather than stepping forward and volleying, many will move back and let the ball bounce. Some will volley, but often they’ll do so well behind the short line and T-Position or not volley as early as they could have because they were sloppy in recovering the T-Position.

If there’s ever an opportunity to hit a shot earlier or higher up the court do it, take it. If you let the ball bounce or travel further down the court, you are allowing your opponent time. It might be a small amount but it could make all the difference. Hitting the ball an inch higher up the court might leave them with too much ground to make up. Not hitting the ball that inch higher up may result in them scraping your shot back with their frame.

If you are struggling with hitting the ball early or being ready to hit the ball early, try practicing the volley exercises below:

As with any sport or pursuit, you really need the margins in squash. Any marginal gain is worth fighting for and time and distance are the biggest of them all. Don’t allow your opponent any time you don’t have to give them – play every shot as early and high up the court as you are able to do.